[Question] Do you eat plastics every day, without fail?

What? You may feel that way. Have you heard of micro-plastics?


Q： “What is「micro-plastics」 (referred to as “MPs” hereafter)?” A：“It is a collective term for plastics 「with 5 millimeter or less in diameter size」.” 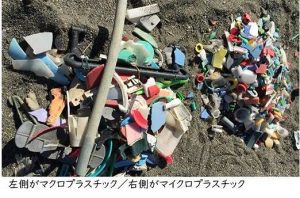 Plastics exist abundantly around us.

Plastic as material has useful features such as lightness, durability and easiness to craft, beyond some other materials such as paper, wood or metal. It can be said that it is a material which is indispensable for our life. However, while it is a good material, plastic inevitably deteriorates as time passes. Further, it becomes fragmented in smaller pieces. Regardless of the original size of any plastic products, eventually they become small MPs (unless they are incinerated). For instance, plastic-made clothespins become fragile over time and crack producing small fractions and/or powdery substance. They are MPs.

Besides, plastic fractions lager than 5 millimeter in diameter are called “macro-plastics”.

Q：“Where are MPs located?” A： “Wherever, all over the world – in soil, in the atmosphere, in deep sea, and even within human bodies…” 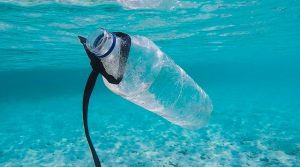 While pieces of plastics would become smaller over time, plastic does not stop being plastic however small it becomes. Larger plastics (macro-plastics) just turn into smaller plastics (MPs). For plastics to be truly decomposed by microorganism, like paper or wood, it takes an enormous amount of time. Eventually, they become so small that cannot be seen with human eyes.

MPs are small and light would move to anywhere on the earth by winds and water. Now, they exist from the top of the Mt. Everest to depth of the Mariana Trench and also within the bodies of creatures (including those of humans). Since amount of plastic products production continues to increase (see the diagram below), impact of MPs on natural environment ever increases. 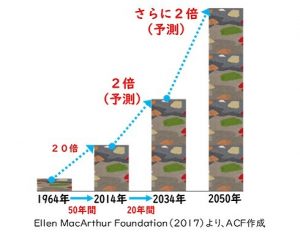 POINT：Plastics stay to be plastics however small they become.

Until humans created plastic, there was (almost) no plastic in nature. (*)

Therefore, we do not have a mechanism for returning human-made plastics to nature again, and decomposing it requires a very long time(called “hard decomposition”). At least, it will not returned nature in the “100 years” that is said to be the average life expectancy of the Japanese in the future (Nakajima, 2019).

(*) There are substances that can be called plastics in the natural world, such as amber and beeswax made by bees. 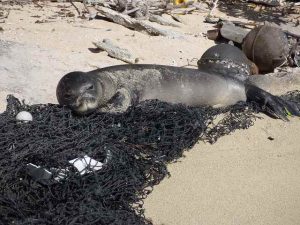 We humans do not often mistake plastic for food. Even small pieces of plastic are rejected due to sense of discomfort if they get in your mouth. But several of the creatures cannot do make this distinction.

MPs have also been detected in many foods and drinks that we eat.

Humans also eat plastics from seafood. We cannot notice a small MP that you can’t see.

It is said that, even if MP is ingested, it will not be absorbed by the human body but it will be excreted, so currently, it is said that there is no major health impact. However, due to the nature of plastics to adsorb chemical pollutants in water, humans may have ingested pollutants including MP. There are still many unclear points about the health effects of ingesting MP, and research is ongoing (Gendatsu, 2020).

You wouldn’t want to eat food with plastic in it, even if you are told, “There is no health risk (for now).”

（Reference） 『Ingestion of plastic into the body, research results for one credit card per week』(AFPBB News,2019/06/12)

So far, we have been introducing “MP”…

How is「 “Arakawa River Clean-aid Forum” 」「“ACF”」）facing the MP problem?

Q：What is 「Arakawa River Clean-aid」？ A：It is an activity to collect Arakawa River’s trash before it flows into the sea!

As the name implies, the main activity of ACF is “Arakawa River Clean-aid”. Roughly speaking, it is “cleaning the riverbank”.

About 10 million people live in the basin of Arakawa River, which flows through Saitama Prefecture and Tokyo.

It is said that most of the trash that flows into the sea comes from the activities of people on land. Only a small percent of the 10 million people may inadvertently or deliberately throw away the trash that pass through waterways in each region and Arakawa river and finally flowing into Tokyo Bay (Pacific Ocean).
*Of course there are some source of trash. 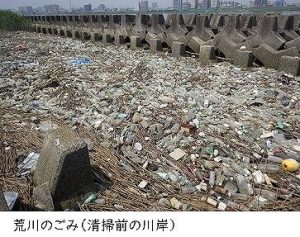 The ocean is tremendously large and wide. Once a small piece of trash has flowed into the ocean, it is almost impossible to collect it.。ACF uses a river clean aid method to collect trash before it enters the sea.

POINT：“Arakawa River Clean-aid” collects trash before it flows into the ocean.

Q：What effect does River Clean-aid have on MP problems? A：① You can collect plastic trash before it becomes MPs  ② The changes in the participants will turn into great power

As Clean-aid participants pick up trash such as plastic bottles and notice the presence of colorful MPs mixed with sand and pebbles. And realize the difficulty of collecting MPs.The MP is very small, and there are many that crumble due to deterioration. 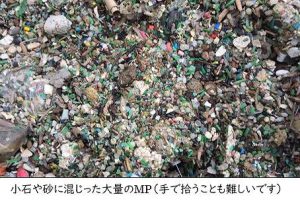 If you leave the plastic trash as is, it will definitely be MP. And, it will eventually be reduced to a level that is invisible to humans. Once this happens, you can no longer retrieve them. The only option is to collect them at the stage where people can pick it up. 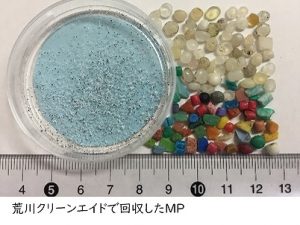 No matter how many times a large-scale Clean-aids are carried out through dozens if not hundreds of people, before we know it, a large amount of trash will accumulate on the banks of the Arakawa River. But, if we can collect the trash there, we can reduce the amount of MP following into the ocean from the rivers. However, the trash washed up on the riverbank is only the tip of the iceberg. Much more is flowing into the Pacific than is recovered by ACF cleanup activities. Unfortunately, clean-aid alone cannot solve the MP problem…

② The changes within participants into great power

It is estimated that in 2010, about 4.8 to 12.7 million tons of plastic trash was released to the ocean (Jambeck et al., 2015). If plastic production and ocean spills continue at this pace, it is reported that by 2050, the weight of plastics in the ocean will exceed the total weight of fish (Ellen MacArthur Foundation, 2016).

Clean-aid participants are stunned by the large amount of debris in front of them. While also having feelings of fun, participants have intense feelings while collecting trash. Through grappling with MP that cannot be picked up because it quickly deteriorates, participants experience the seriousness of ocean pollution caused by plastic.

It is true that MP problems cannot be solved by the Arakawa River Clean-aid alone. However, if the awareness of everyone involved in Clean-aid to the MP problem changes, it will spread to their daily life and work. This change is the greatest effect to the Clean-aid MP problem.

POINT： Changing the hearts and minds of the participants is the best power we have against MP. 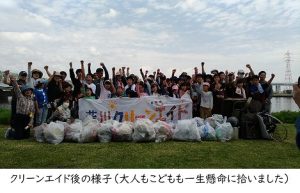 QWhat is the target of ACF? A：① To let as many people as possible know about the micro-plastic problem through Clean-aid  ② To expand Arakawa’s activity model all over Japan and all over the world.

As mentioned above, in order to solve the micro-plastic problem, let as many people as possible know the current state and seriousness of the problem, and as many as one of them take action in their daily lives and workplaces. Will be a great power.

☆Message of the ACF staff

The sea is connected to the world. In order for river clean-aid to be effective in solving micro-plastic problems on a global scale, clean-aid must be carried out in rivers around the world.

ACF aims to expand this model all over Japan and all over the world, using activities on Arakawa River as a model. And we will collaborate with colleagues around the world who aim to solve micro-plastic problems.

ACF is not needed if there is no trash from the river after thorough reduction of plastic trash (prevention) and cleaning of the river (treatment). The final goal is “dissolution of organization.”

There are concerns that artificial litter (mainly plastics) could cause multifaceted problems in ecosystems, food issues, water, and sustainable consumption and production. It is said that 90% of marine litter is discharged from 10 rivers in developing countries, mainly in Asia, and we need to solve this problem as soon as possible before it causes more serious damage. On the other hand, the amount of river litter per unit population is based on data from Europe and the United States, and domestic data is considered to be necessary. This project will examine the amount of river litter and its control, targeting the Arakawa River, which has one of the largest populations in Japan.
*Some of the activities in this project are not open to the public.

[Purpose of this project]

According to Jambeck et al’s article(2015), the amount of marine litter generated in Japan is estimated at 20,000-60,000 tons and is becoming more prevalent.
Japan’s annual plastic production is 9 million tonnes, of which 2-7% is a figure that many in Japan question the estimation method.
It is necessary to determine and verify the amount of litter per unit population in the Arakawa River, which has one of the largest populations of rivers in Japan. 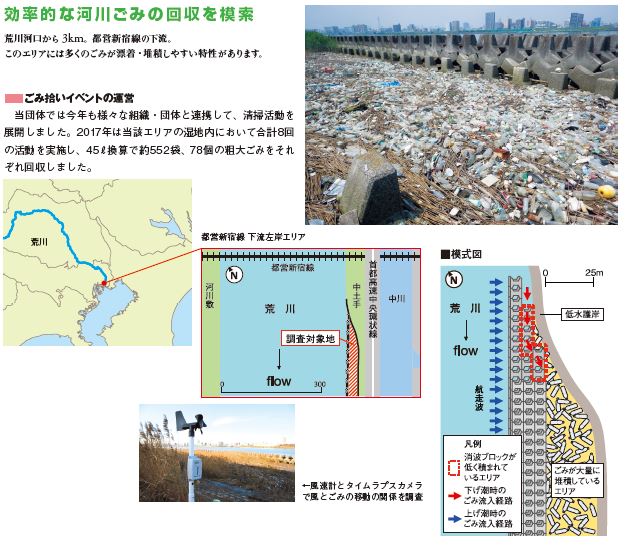 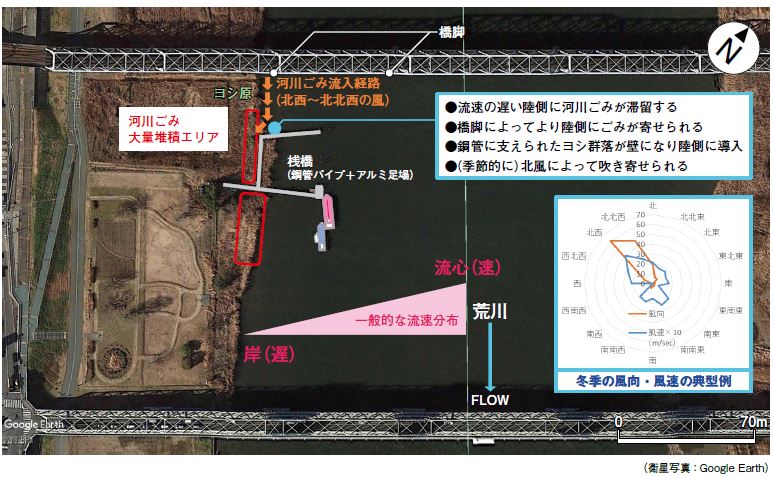 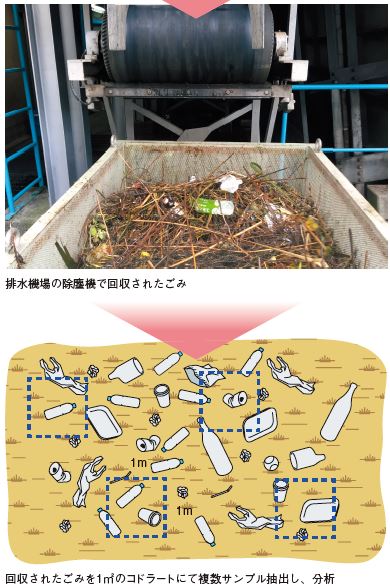 “Soil” is a remake application of the scene (terrain) in KAKO Satoshi’s masterpiece “Chikyuu sono naka wo sagurou” (The Earth, Let’s explore it), published in 1975, drawn by KAKINUMA Tsutomu with the theme of “soil”. 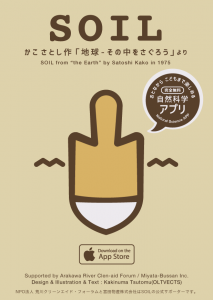